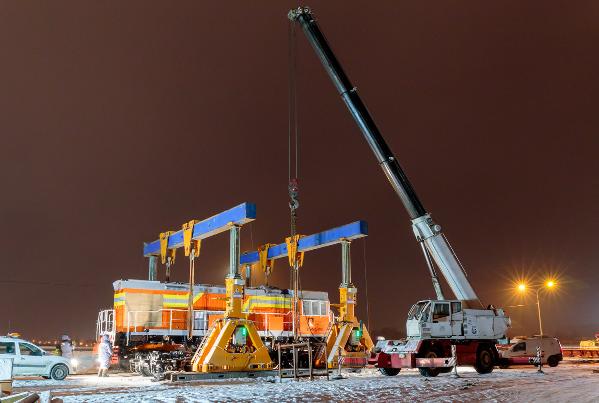 Delivery of equipment is divided into two batches. The first one, consisting of three locomotives, left Lyudinovo Locomotive Plant (LTZ, part of STM) in the end of December 2021. For transportation, each TGM8A was loaded onto a separate motor-truck using a gantry system. The truck convoy has already reached the port of St. Petersburg, from where the diesel locomotives were got off by sea to the Guinean port of Conakry. The second batch is now being prepared for the delivery. Shipment should take place in the 1st quarter of 2022.

"We build our systematic work on the principles of customer centricity and see our task as producing equipment that best meets the wishes of our customers. This is our first export contract in Guinea, I want to note that increasing the share of exports in the STM’s sales structure and expanding cooperation with industrial companies will be a priority for us in 2022,” commented Anton Zubikhin, General Director of STM Trading House.

An innovative multiple unit operation system (MUO) was implemented on diesel locomotives for CBK: a method of rolling stock control, in which several locomotives are coupled into one train, and traction motors are controlled from one station. This increases maximum acceleration, gives a lower axle load, and eliminates the need to hitch the locomotive. In addition, the traction train can continue to move even if one or more machines fail, which significantly increases the overall reliability. Moreover, all diesel locomotives have been modified taking into account the climatic conditions of the future operation location and are equipped with reinforced casing and double-glazed windows.

TGM8A is a four-axle diesel locomotive with hydraulic transmission, designed for shunting operations on 1435 mm gauge railway tracks, the power of the locomotive is 882 kW (1200 h/p).