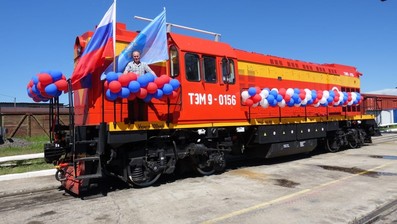 The four-axle shunter with electric transmission is driven by a 1200 hp diesel engine. The locomotive is one of the most popular in the segment of industrial railway logistics, since one of its advantages is its ability to pass curves of small radii up to 50 m. The TEM9 shunter equipment includes a modern microprocessor system for monitoring, control and diagnostics, a video surveillance system, an AGS8 wheel flange lubrication system, and a fuel consumption monitoring system with a GLONASS / GPS module.

“Shunting locomotives produced by STM Holding are in high demand among mining companies. The commissioning of TEM9 at PIMCU production site marked the beginning of cooperation with the largest enterprise supplying the nuclear industry which is especially valuable for the Holding. Within the framework of our cooperation, STM specialists fulfilled all customer requirements which allows for increasing the efficiency of the client’s renewed locomotive fleet,” said Anton Zubikhin, STM Deputy General Director for Sales.

TEM9 Diesel Locomotives operate in 60 regions of Russia at the sites of large machine-building, chemical, metallurgical and other enterprises with their own track facilities, as well as at railway junctions and freight stations of Russian Railways.