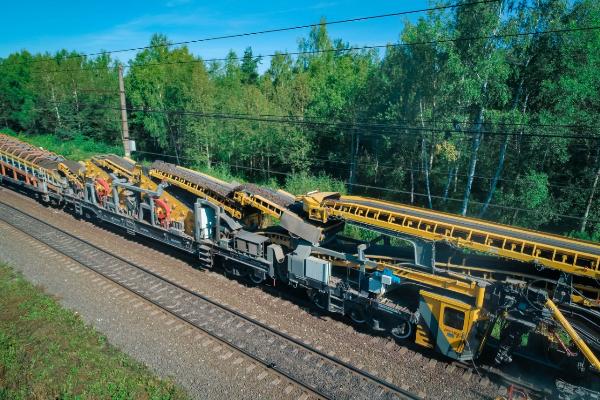 Sinara Transport Machines Holding (STM, part of the Sinara Group) established a new Railway Infrastructure Division, the main task of which will be the development and provision of various services for the infrastructure of Russian Railways and other customers. Vitaly Votolevsky, STM Deputy General Director, is an appointed Director of the Division. It is planned that the services will be provided using both the equipment produced by the Holding’s enterprises as well as leased one.

The specialists of the company study the prospects for development and production of high-performance track machines which are currently not being produced by STM enterprises. The company also considers the possibility of cooperation with foreign manufacturers of track equipment, studies the areas of joint work with the Research Institute of Railway Transport (VNIIZhT, the largest scientific center of the railway industry in the field of research and development, which is able to carry out the entire range of certification tests), the Russian University of Transport (MIIT) and the Research and Design Institute for Information Technology, Signaling and Telecommunications in Railway Transportation (NIIAS). STM plans to provide the first infrastructure services already in 2022.

“In the near future we will determine the list of those infrastructure services which we’ll offer both to the national carrier and to industrial enterprises. Already now, we can say that we are interested in providing services for running maintenance and various types of track repair as well as in construction of new infrastructure. It is our plan to actively develop our competencies in the field of welding, grinding and milling of rails. At the same time, it is not a complete list,” said Vitaly Votolevsky.

STM Holding includes 13 manufacturing enterprises and 40 service centers for the repair of various track equipment for maintenance, construction and operation of railways as well as RSP-M enterprise (part of the Railway Infrastructure Division), which specializes in providing services for grinding rails en route and their stationary welding to Russian Railways. Moreover, together with the Siberian State University of Railways, STM tested a new technology for high-speed rail grinding at the Kuibyshev Railways testing ground in the summer 2021. The obtained results showed a high potential of the new high-speed technology which made it possible to increase the quality, speed and efficiency of rail grinding processes almost in 3 times. Furthermore, in the framework of the International Forum and Exhibition “Transport Week-2021” in Moscow, the Holding and the University signed an agreement on the development of a new model of a high-speed rail grinding train. The assembly of a prototype is scheduled for spring 2023.