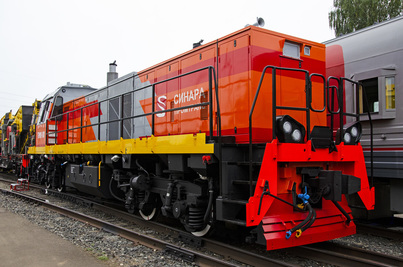 “We are happy, that our long-time partner MMK – the Russian ferrous metallurgy flagship – carefully follows the latest technical shunting equipment solutions and step by step equips its locomotive fleet with the latest generation diesel locomotives – productive, maintenance-friendly, offering a high level of driver’s comfort and safety”, – commented Anton Zubikhin, STM Deputy General Director for Sales and General Director of STM Trading House: “Especially important from the economic point of view is the high fuel efficiency and the low operating costs of TEM10. It is a relatively cheap machine with a number of operational advantages: it has two power units, which can save up to 28% of fuel if compared with similar locomotives."

Diesel locomotive TEM10 with electric transmission and 1164 hp output is equipped with two power plants based on Volvo Penta diesel engines that meet the EU Stage III emission standard. Their principle of operation is as follows: mainly one engine is used, the second one turns on only when the load increases, which allows to save up to 30% only on fuels and lubricants.

The shunting diesel locomotive TEM10 has been serially produced since 2021 and has in its basis a modular design, which significantly simplifies and speeds up its maintenance in the presence of reserve units. TEM10 is like a Lego toy, its technical features can be changed based on the wish of a client, upgrading each module separately. Thus, at Magnitogorsk diesel locomotives, a video surveillance system with five all-round cameras and a wheel flange lubrication system are installed, which ensures the smooth movement of wheels along the railway tracks. Moreover, the unique locomotive is able to pass the curves with a minimum radius of 40 m.

The innovative locomotive is a highly-efficient machine. The newest microprocessor control and diagnostics system includes a working algorithm adapted to controlling two power plants, which allows to increase energy efficiency; it monitors over 3,000 operational parameters of the locomotive equipment. In addition, this is the first control system based on Russian microcontrollers.

The locomotive is also equipped with a screw compressor unit with an innovative system for cleaning and drying compressed air with a capacity of 5.25 m³/min. All auxiliary drives are powered by static converter asynchronous motors to reduce maintenance costs. When developing the locomotive, the customer requirements in the field of metallurgy, oil and gas sector and railway logistics were taken into account.

The buyer of the first prototype of TEM10 was Novolipetsk Metallurgical Plant (NLMK Group). Also, these locomotives are successfully operated by the enterprises of the Pipe Metallurgical Company (TMK): since April of this year, two TEM10s have been used at Seversky and Volzhsky pipe plants (part of TMK Holding). These very machines gave a start to the re-equipment program of the company's diesel locomotive fleet.

Note that TEM10 has passed all necessary procedures and has certification CU TR 001/2011 "On the safety of railway rolling stock", which gives the right to use the main lines and adjacent stations of Russian Railways.