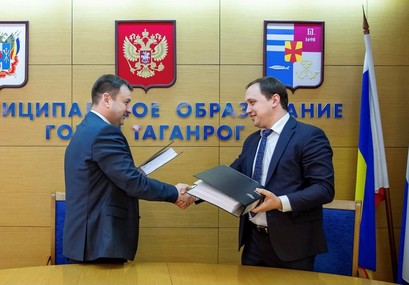 This large-scale project on modernization of the entire tram network envisages the development of new and modernization of the existing tram infrastructure, as well as the purchase of new rolling stock to serve all city routes. The total funding required amounts to 11 billion 839 million rubles, of which 2.58 billion rubles will be invested by the city itself, and the remaining funds will be invested by Sinara GTR Taganrog (6.86 billion rubles through attracting credit funds fr om the State Development Corporation VEB.RF and 2 billion of own funds).

In the framework of the project, 45 km of new modern tram tracks will be built and 60 units of rolling stock will be purchased. A new single-section totally low-floored tram will be produced specially for Taganrog. A set of modern functions envisaged in the new tram includes an automatic announcement device, a ticket selling machine, a display panel (roller titles), media complexes, video surveillance systems, and charging slots for electronic gadgets. The vehicles will also be equipped with alerting and orienting systems for disabled people (e.g. visually impaired and low-mobility groups).

Also as a concessioner, Sinara GTR Taganrog will overhaul the tram depot, the traction substations and the operation control station. In addition, according to the terms of the contract, the company will build 80 modern stop shelters equipped with electronic information boards and video surveillance systems.

According to Evgeny Vasiliev, this agreement is a unique example of tram concession project’s implementation. “Taganrog is the first city in Russia to sign a concession agreement for the comprehensive modernization of the whole tram infrastructure, not some part of it. As a result of this large-scale project, Taganrog will receive a fully updated tram park and related modern infrastructure, which will last for many years. We also hope that Taganrog will serve as a positive example to other Russian cities, wh ere the issue of public transport monetarization is also relevant, and stimulate them to use the concession agreement mechanism for those purposes,” he noted.

“Signing the concession agreement is an essential event for Taganrog. City tram lines have been first built in 1932. It is important for us not only to preserve this type of public transport but also to make it modern and comfortable for our residents and guests. The modernization of tram infrastructure will also change the appearance of Taganrog and will attract even more tourists here,” underlined the head of the Taganrog City Administration Andrey Lisitsky.

The project will be carried out in two phases. Following the results of the first phase, which will be implemented until the end of this year, the city will receive ten new trams, three traction substations will be reconstructed and the operations control station in R.Luxemburg Street will be repaired, as well as a new tram track (from the Red Kotelshchik factory to the ring in Dobrolyubovskiy lane) will be built. The second final stage of the project is scheduled for September 2022. By then, all construction work under the agreement will be completed, and the city's renovated tram park will be finally put in operation.